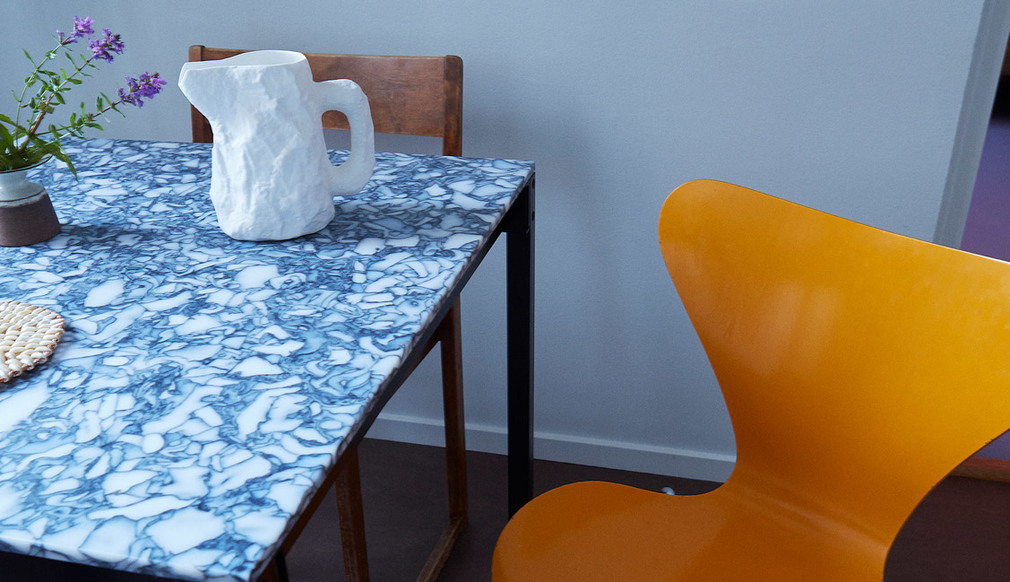 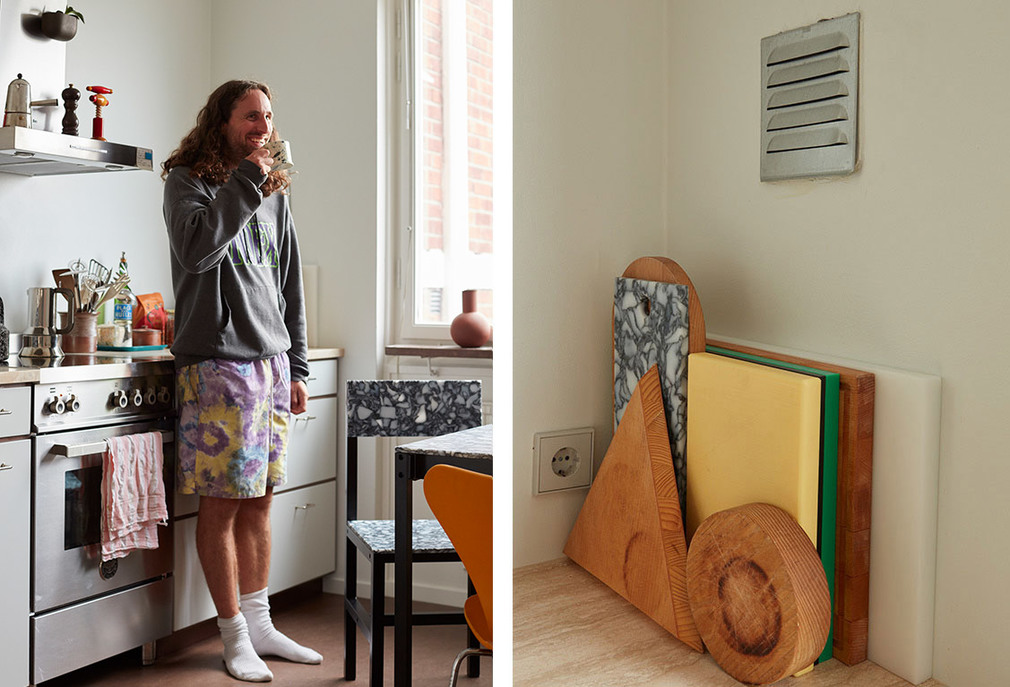 To the theme auctions

Furniture designer Fredrik Paulsen’s praxis is all about creating context, both imaginative and functional. His home is also a world of its own, filled with details made by Fredrik himself, his friends and design idols. Follow us as we visit Fredrik in his seventh-floor flat in Gröndal.

Fredrik Paulsen likes to be surrounded by inspiring furniture. On floor 7.5 in one of three culturally marked high-rise buildings towering in the middle of Gröndal (just outside Stockholm’s southern inner city), Paulsen and his partner Bodil have found the ”perfect height” (Bodil wants to be near the ground, while Fredrik wants to be high up). The view from the flat extends all over the northern part of town, with Fredrik pointing to various buildings he likes, such as the Dagens Nyheter Tower and the Northern Towers.

In the yellow velvet sofa lies the greyhound Miguel, stretching himself out. Along the big, bright room which acts as both a living room and dining room, lie two bedrooms (one of which is pink shimmering and belongs to daughter Karin), as well as a newly renovated kitchen. The longer one is in the flat, the more intricate details one discovers. Art, sculptures, vasers and furniture, things that seem to all have a personal history. And chairs – Fredrik is a chair nerd. Some of his own chairs are paired with classic and unique pieces made by Fredrik’s design idols.

Left: Chair by Paolo Piva, children’s chairs by Sven Markelius. Center: Chair made from recycled cutting boards from PEACE, one of the projects Fredrik is currently working on with other creators, and a yellow chair designed by Arne Jacobsen. Right: Lamp by Fredrik’s gallery colleagues at Etage Projects, Soft Baroque. The painting above the sofa is made by Stefan Narancic.

Fredrik Paulsen grew up in Vejbystrand, in a villa which was built in 1986 and furnished with IKEA furniture from the same year. Fredrik longed for something else. He was interested in horror films and wanted his bedroom to feel like outer space. He decorated it with carved wooden things from Asia, masks and lava lamps, and ”futuristic stuff”.

Fredrik wanted to skateboard, but there were no paved roads where he lived, so he had to go out of his way to find suitable places. Perhaps this gave birth to some kind of do-it-yourself attitude. After graduating from school Fredrik moved out of his home, and a friend suggested that he apply to Beckmans Design School in Stockholm, which Fredrik ultimately did.

Left: The table is designed by the Italian architect Ettore Sottsass, who was an honorary professor at a university attended by Fredrik (Royal College of Art in London), and who also founded the Memphis Group in his sixties. *He brought together young, powerful designers and created new contexts, he made absolutely incredible furniture, he was the best.”
Right: Stool inherited by Bodil, table from Bukowskis. Screen print by Lisa Johansson, nail polish sculpture by Åsa Jungnelius.

Fredrik likes to exercise his art and design on something practical and physical. He is not only interested in furniture but also the entire practice. Together with Åsa Jungnelius and Gustaf Nordenskiöld, he has a firm called Last, a concept where they test if an artist or designer can read directly the final customer without a line of production. 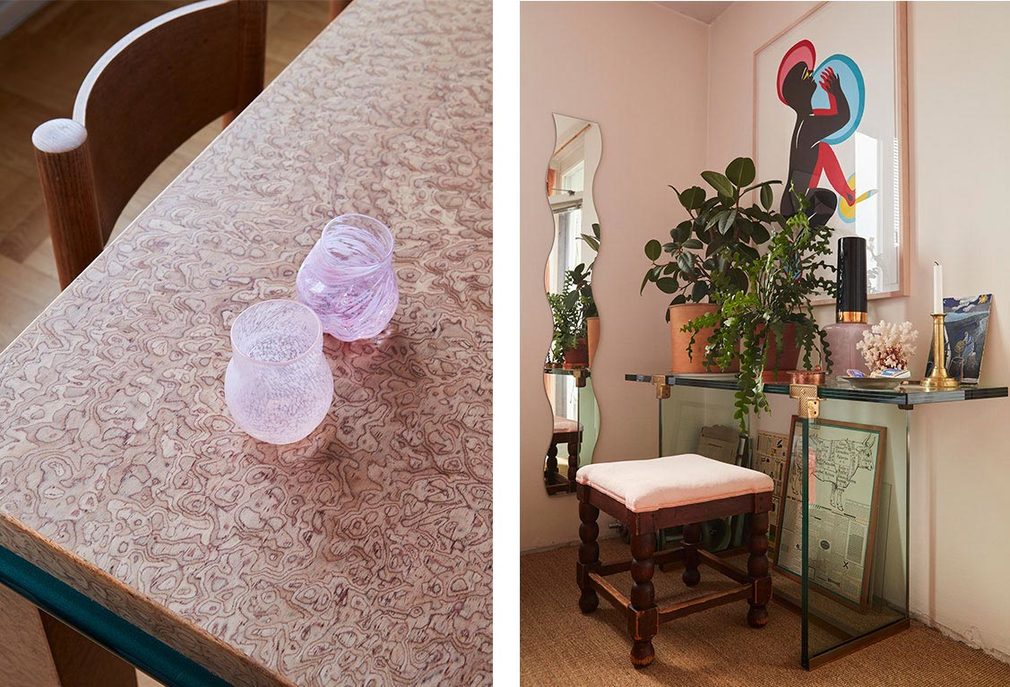 Left: The table is designed by the Italian architect Ettore Sottsass, who was an honorary professor at a university attended by Fredrik (Royal College of Art in London), and who also founded the Memphis Group in his sixties. He brought together young, powerful designers and created new contexts, he made absolutely incredible furniture, he was the best.” Right: Stool inherited by Bodil, table from Bukowskis. Screen print by Lisa Johansson, nail polish sculpture by Åsa Jungnelius.

The hatches in Fredrik’s kitchen är made from offcuts from his studio. A light stone slab makes the kitchen look homely and welcoming rather than newly renovated. The kitchen table and one of the chairs comes from Fredrik’s project PEACE, and are made from recycled cutting boards. A classic yellow ”Sjuan” chair is also present. Fredrik offers tea tasting of seaweed, a gift from one of his Japanese collectors, in odd cups. ”This is where mosaic and cupboards complete made in glas will be!”, Fredrik says, pointing about the kitchen, which is still not completed. It feels as if much in Fredriks home is allowed to be a process, which is simply the whole point. 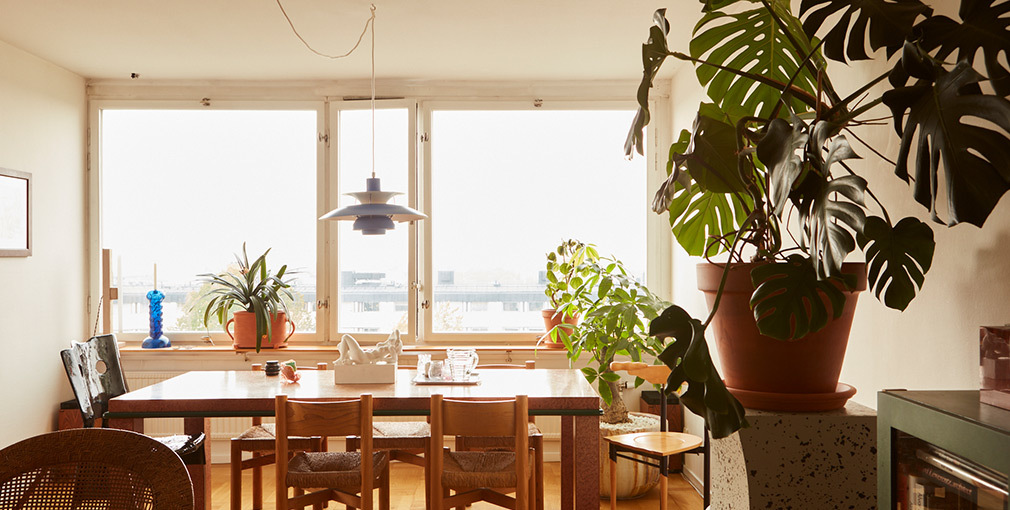 To the theme auctions