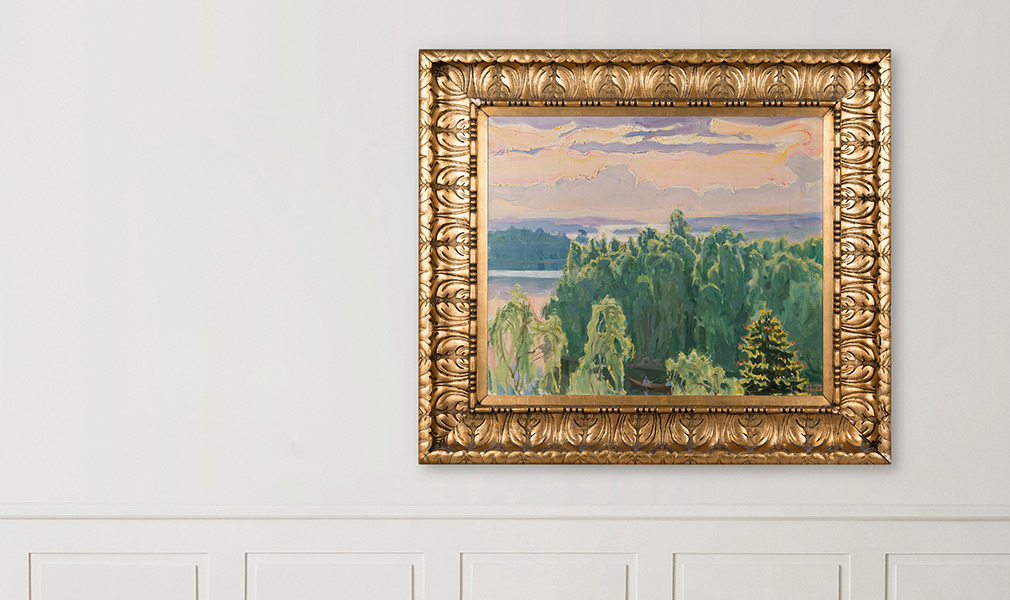 Akseli Gallen-Kallela (1865–1931) belonged to a generation of Finnish artist that had the new possibility to receive good art education in Finland. At the Finnish Art Society’s drawing school, he studied under Fredrik Ahlstedt and Albert Edelfelt, among others, and he also studied at Adolf von Becker’s private academy. Von Becker was his most significant teacher in French realism.

In autumn 1884 Gallen-Kallela travelled to Paris to study at the Académie Julian. The acquaintance with the master in naturalistic plein air painting, Jules Bastien-Lepage, was very meaningful to him. During the winter of 1883–84 Gallen-Kallela was heavily influenced by Friedrich Nietzsche, and spiritism and theosophy left a permanent trace in his viewpoints and thinking. Therefore, Gallen-Kallela’s art from mid-1880s on can be regarded to fall within the scope of symbolism.

Gallen-Kallela was a true cosmopolitan and in addition to repeated trips to Paris, he visited London, Florence, Budapest and Nairobi between 1909 and 1911. The trip to London influenced the decorative elements in his art, and in Italy he studied the fresco technique of the antique. The oeuvres from Kenya feature strong and bold colours.

Despite the numerous visits abroad, Finland and its unique nature always remained a priority. The artist home Kalela in Ruovesi, approx. 80 km north of Tampere, was finished in 1895. Built of hewn timber, Kalela is one of the best-known architectonic creations representing Finnish national romanticism. Gallén-Kallela’s atelier villa Tarvaspää was built in Espoo between 1911 and 1913. Now the building serves as a museum for his art.

The so-called Golden Age of Finnish Art is considered to span years 1880 to 1916 and it coincided with the Finnish national awakening. Artists, sculptors, composers, architects and writers immersed themselves in history and folktales in order to grasp the true Finnish identity which they wished to convey through their creative work. Among the artists of the Golden Age, it was undoubtedly Gallén-Kallela who studied the Finnish national soul with the greatest degree of devotion and fascination. An integral part of this frenzy for the purely Finnish spirit was a love of the nature, which, in Gallén-Kallela’s view, reflected the Finnish national character.

“One who lives and works out in the nature gains such a personal relationship with his surroundings over time that he can almost find himself talking to the trees of the forest. Our folk poetry witnesses how a deep empathy with the nature has been characteristic to us Finns. We are therefore prone to have a special aptitude to personify it; the plants of the forest become intimate friends and we can almost identify different characters among the trees. We entrust them different things: ones to the slender birch and others to the grey dead standing pine, the storm-twisted redwood or the grim dark spruce. And the man of nature observes the life of the forest with a completely different insight than everyone else. He notices the slightest changes in it: in the colour of the trees as well as their health and vitality. For such a person the forest is never dead, not even in the coldest day of February – it only sits so silently that this silence itself can speak. Underneath the drifts of snow, there is pulsating strong and plentiful life, like that of a hibernating bear, sleeping in its winter den.”

In this piece, owned by the same family since the 1910s, the interaction of light and shadow and flaming colours are typical elements that keep recurring in Gallén-Kallela’s art. Some of the features in it take one’s thoughts to the view from the tower of Tarvaspää, but the oblong scenery, the serenity and the two rowers in the foreground presumably indicate that the artist wanted to illustrate the ideal landscape, as if a celebration of the Finnish nature. 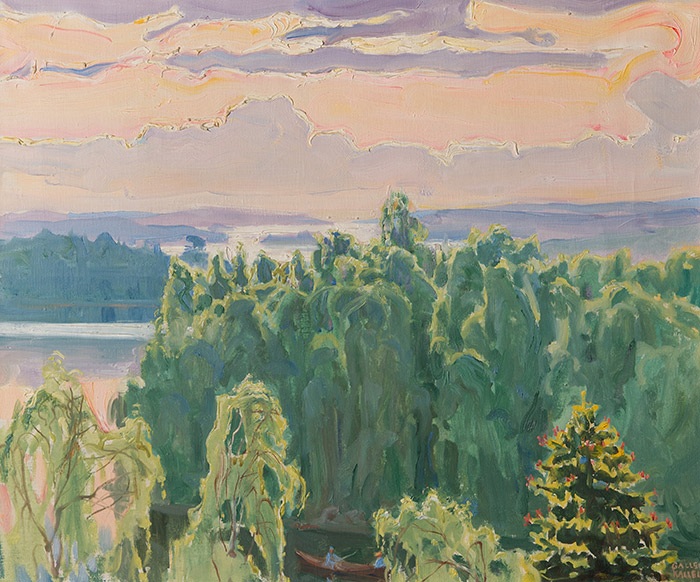 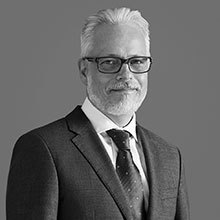